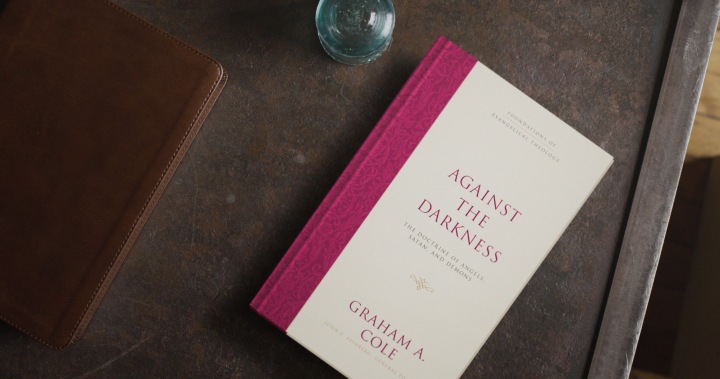 Against the Darkness: The Doctrine of Angels, Satan, and Demons, by Graham A. Cole

If you ask me, “Who is in your top 3 of theology writers?”, Graham A. Cole is a name you will hear.

One of my biggest frustrations with many contemporary theologians is the dryness and coldness of their writing. Often, when I open a theology book, God seems to be treated as an object to be dissected rather than the Subject who has revealed himself not only to a part of ourselves -like the intellect- but to us as people. When I read Dr. Cole’s work, all of me is engaged and touched because he writes not just for the intellect but also for the hearts and hands of believers.

His newest book, Against the Darkness, explores the doctrine of angels and demons, answering key questions about their nature and the implications for Christians’ beliefs and behavior. An understanding of the reality of angels and demons is key because it encourages believers to be vigilant in light of spiritual warfare and to be confident in Christ’s victory on the cross.

The book has been endorsed by scholars such as Bruce A. Ware, D. A. Carson, Peter Adam, and Kevin Vanhoozer.

Dr. Graham A. Cole is Dean of Trinity Evangelical Divinity School and Professor of Biblical and Systematic Theology. He is also an ordained Anglican minister. His other publications include He Who Gives Life: The Doctrine of the Holy Spirit (Crossway, 2007), and The God Who Became Human: A Biblical Theology of Incarnation (IVP Academic, 2013.)

Unsettling Truths: The Ongoing Dehumanizing Legacy of the Doctrine of Discovery, by Mark Charles and Soong-Chan Rah

“You cannot discover lands already inhabited.” I don’t remember a time when I wasn’t aware of indigenous communities. The latter maybe has to do with my own identity and history as a Caribbean woman from Puerto Rico, our Taíno heritage, and my proximity to Latin America. For many of us, to be unaware of the history of our indigenous communities of Abya Yala is to be unaware of ourselves. However, historically there has been a systematic attempt to erase the true history of native people in both Abya Yala and Turtle Island.

Mark Charles and Soong-Chan Rah’s new book, Unsettling Truths, deals with the history and legacy of the “Doctrine of Discovery” in the United States from a historical, theological, and cultural perspective. The authors’ aim is healing through the recovery of a common memory and shared understanding of where we have been and where we are going. As other nations have instituted truth and reconciliation commissions, so does Charles and Rah call the United States and its churches to a truth-telling that will expose past injustices and open the door to conciliation and true community.

The book received a starred review from Publishers Weekly. It has also been endorsed by Randy Woodley, Andrea Smith, Mark Noll, and Gene L. Green, among other influential voices.

Mark Charles, a man of Navajo and Dutch American descent, is a speaker, writer, and consultant on the complexities of American history, race, culture, and faith. He is a regular columnist for Native News Online and frequently writes for his blog Reflections from the Hogan.

Soon-Chan Rah is Milton B. Engebretson Professor of Church Growth and Evangelism at North Park Theological Seminary in Chicago, IL. His other publications include The Next Evangelicalism: Freeing the Church from Western Cultural Captivity (2009)and Prophetic Lament: A Call for Justice in Troubled Times (2015). 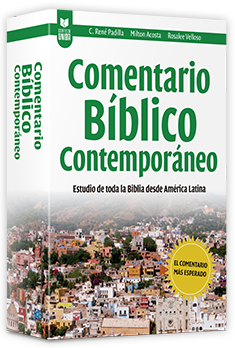 This commentary is a monumental contribution by the Latin American church to the global church. It was written by over 100 theologians, biblical scholars, and missiologists from all over Latin America and the Caribbean, including Juan Stam, Pedro Arana Quiroz, Odja Barros, Dinorah B. Méndez, and Jules Martínez. It includes more than 100 thematical articles, and study questions to help the reader think more critically about the Bible and its application to their context.

For more information on this publication, click here. To buy, I recommend doing it through Vida Libros.

René Padilla, general editor of the commentary, is an Ecuadorian New Testament scholar and missiologist. He holds a Ph.D. in New Testament from the University of Manchester and is one of the founders of the Latin American Theological Fellowship.

Milton Acosta Benítez is the editor of the Old Testament section of the commentary. He was born in Barranquilla, Colombia. He graduated with a Ph.D. in Old Testament from Trinity Evangelical Divinity School. Dr. Acosta currently serves as professor of Old Testament at the Fundación Universitaria Seminario Bíblico de Colombia in Medellín, Colombia.

Rosalee Velloso is the editor of the New Testament section of the commentary. She is a Brazilian theologian from São Paulo, currently serving as principal of Redcliffe College, a post-graduate mission training center in the United Kingdom. Dr. Velloso holds a Ph.D. in Biblical Theology from Duke University.

She received her Master of Divinity degree in 2019 from Trinity Evangelical Divinity School (TEDS) in Deerfield, IL. She is theologically reformed-ish, significantly shaped by Liberation Theologies, and with charismatic sensibilities. Upsetting both conservatives and progressives is her spiritual gift.

© 2018 All rights reserved. Copying and republishing our content on other websites, or in any other place, without written permission is prohibited.